Hello everybody at DGM headquarters,
I was at Verona Roman Theater that 22nd of June, 2003. I had been together with my then-fiancée (now-wife) for almost a month and I was deeply in love, with that fresh love that makes 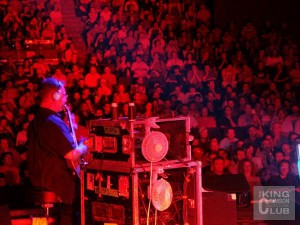 you “walk on air”. I attended the concert with a friend of mine and I remember a great show, though some moron did shot a couple of photos making the setlist being shortened of at least one encore. There were also some flaws in Ade’s equipment during Tbtp2, if I recall it right, but Ade managed to make everything work fine and the P3 behind him kept going and rocking and rolling while he fixed the thing.
When the concert ended I wrote a text to my girlfriend (we were young and it was late, next day she had to go to school) telling her that had been an amazing concert, and a great conclusion for an amazing month.
Me and my friend went to the back of the theater, when after a while Ade showed up. I remember thinking that I didn’t have the time for both taking a photo or shaking his hand so I chose for the latter. I shaked his hand and thanked him, for that night and for many days and nights to come with the spirit of Crimso inside of me.

It would be great for me if this concert would be made available on DGMlive, sooner or later.